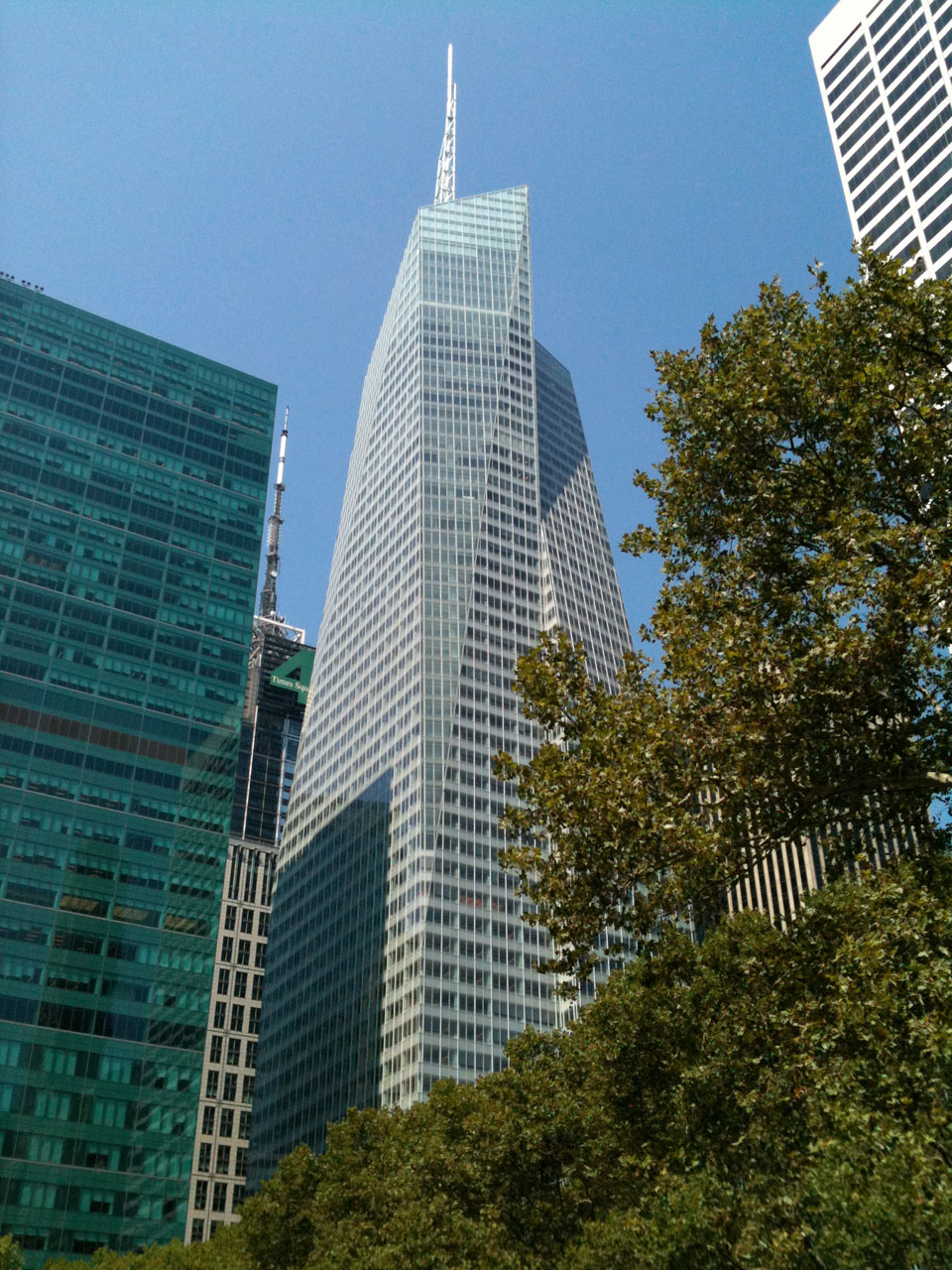 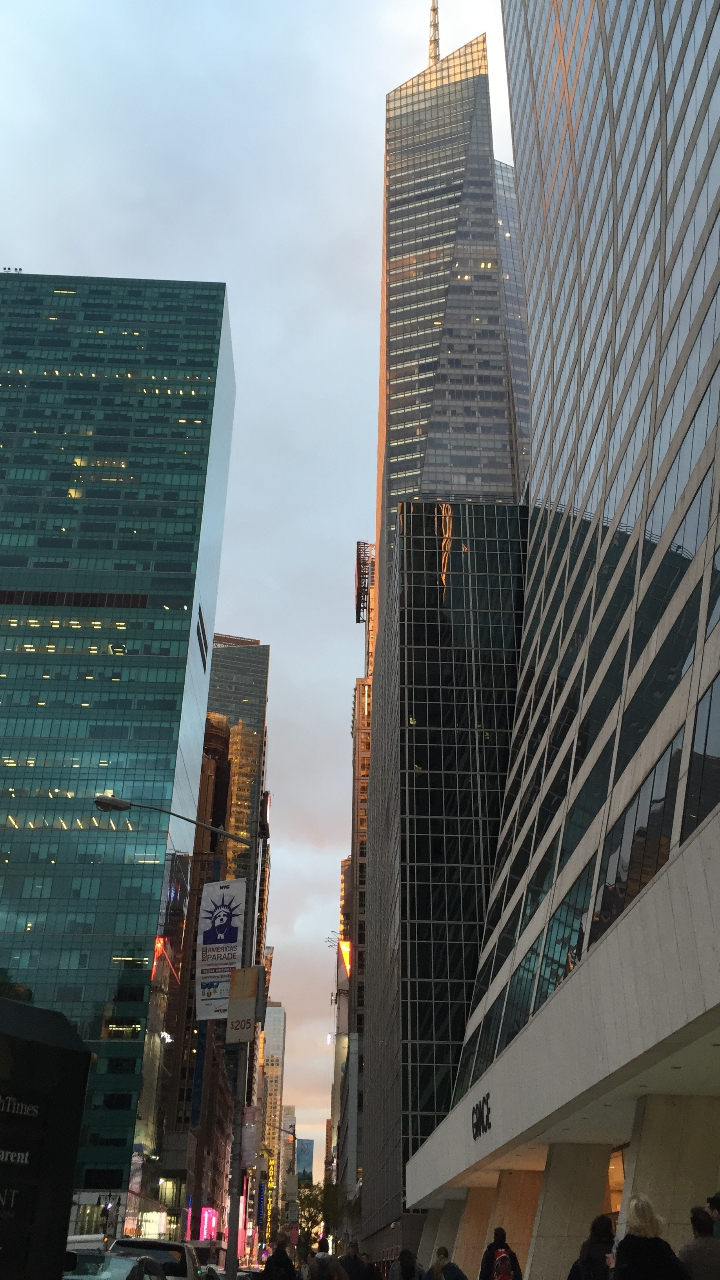 Bank of America Tower NYC uses translucent high-performance glass in floor-to-ceiling glazing to permit maximum sunlight in interior spaces, in addition to featuring ““floating”” floors to facilitate more even, healthful, and efficient heating and cooling. It captures and reuses all rainwater and wastewater, saving millions of gallons of precious water each year. A very high percentage of the buildings materials came from recycled and renewable source within 500 miles of New York City.

Bank of America Tower at One Bryant Park was the first skyscraper in North America to achieve LEED Platinum certification and ranks among the most environmentally advanced skyscrapers in the world. The 2.35-million-square-foot, 51-story office tower was completed in 2010 and conceived with the vision of creating the highest quality modern workplace emphasizing daylight, fresh air, and an intrinsic connection to the outdoors.

The project includes fifty-two (52) elevators and three (3) escalators to serve the NY headquarters of Bank of America Tower New York and other office tenants, along with a recreated Henry Miller’s Theater, which had been located on the site since 1918. There is also be an elevator to the transit mezzanine below ground.

The 54-story building, rising 945 feet above the west side of Sixth Avenue, between 42nd and 43rd Streets, was completed in 2009. The $1 billion project was co-developed by The Durst Organization and Bank of America, which has committed to a 20-year lease for 1.1 million square feet as their New York operations headquarters.

New Construction Design
We use cookies to personalize content and ads, to provide social media features and to analyze our traffic. We also share information about your use of our site with our social media, advertising and analytics partners who may combine it with other information that you’ve provided to them or that they’ve collected from your use of their services.
Cookie SettingsAccept All
Manage consent

This website uses cookies to improve your experience while you navigate through the website. Out of these, the cookies that are categorized as necessary are stored on your browser as they are essential for the working of basic functionalities of the website. We also use third-party cookies that help us analyze and understand how you use this website. These cookies will be stored in your browser only with your consent. You also have the option to opt-out of these cookies. But opting out of some of these cookies may affect your browsing experience.
Necessary Always Enabled
Necessary cookies are absolutely essential for the website to function properly. These cookies ensure basic functionalities and security features of the website, anonymously.
Functional
Functional cookies help to perform certain functionalities like sharing the content of the website on social media platforms, collect feedbacks, and other third-party features.
Performance
Performance cookies are used to understand and analyze the key performance indexes of the website which helps in delivering a better user experience for the visitors.
Analytics
Analytical cookies are used to understand how visitors interact with the website. These cookies help provide information on metrics the number of visitors, bounce rate, traffic source, etc.
Advertisement
Advertisement cookies are used to provide visitors with relevant ads and marketing campaigns. These cookies track visitors across websites and collect information to provide customized ads.
Others
Other uncategorized cookies are those that are being analyzed and have not been classified into a category as yet.
SAVE & ACCEPT

DISCLAIMER.
vda® does not manufacture or control any of the products referenced or recommended on the vda® website. The reference, availability and/or recommendation of such products does not indicate any affiliation with, or endorsement of, any product, seller, provider, distributor or manufacturer. Accordingly, vda® does not provide any warranties with respect to such products.

TO THE FULLEST EXTENT PERMITTED BY LAW, vda® MAKES NO, AND DISCLAIMS ANY AND ALL, WARRANTIES WHATSOEVER WITH RESPECT TO SUCH PRODUCTS, INCLUDING ANY (A) WARRANTY OF MERCHANTABILITY; (B) WARRANTY OF FITNESS FOR A PARTICULAR PURPOSE; (C) WARRANTY OF TITLE; OR (D) WARRANTY AGAINST INFRINGEMENT OF INTELLECTUAL PROPERTY RIGHTS OF A THIRD PARTY; WHETHER EXPRESS OR IMPLIED BY LAW, WHETHER ARISING BY LAW, COURSE OF DEALING, COURSE OF PERFORMANCE, USAGE OF TRADE, OR OTHERWISE. YOU ACKNOWLEDGE THAT YOU HAVE NOT RELIED UPON ANY REPRESENTATION OR WARRANTY MADE BY vda®, OR ANY OTHER PERSON ON vda®’S BEHALF. WITHOUT LIMITING THE FOREGOING, vda® MAKES NO WARRANTY OF ANY KIND THAT ANY SUCH PRODUCTS OR RESULTS OF THE USE THEREOF, WILL MEET YOUR OR ANY OTHER PERSON’S REQUIREMENTS, OPERATE WITHOUT INTERRUPTION, ACHIEVE ANY INTENDED RESULT, BE COMPATIBLE OR WORK WITH ANY PRODUCTS, SOFTWARE, SYSTEM, OR OTHER SERVICES, OR BE SECURE, ACCURATE, COMPLETE, FREE OF HARMFUL CODE, OR ERROR FREE. ANY REPRESENTATION OR WARRANTY OF OR CONCERNING ANY SUCH PRODUCTS IS STRICTLY BETWEEN YOU AND THE THIRD-PARTY OWNER, SELLER, PROVIDER, DISTRIBUTOR OR MANUFACTURER OF SUCH PRODUCTS.

SOME JURISDICTIONS LIMIT OR DO NOT ALLOW THE DISCLAIMER OF IMPLIED OR OTHER WARRANTIES SO THE ABOVE DISCLAIMER MAY NOT APPLY TO YOU.